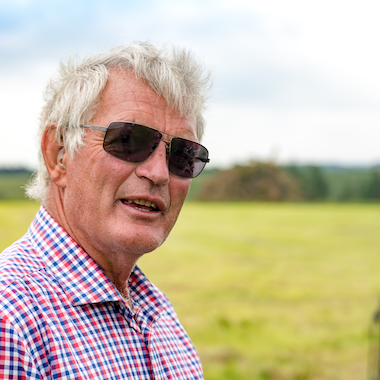 Richard Milne, a farmer from South Taranaki has lived with hearing loss his whole life.

My father decided that I wouldn’t have a hearing aid because of the stigma around being deaf back then. The technology was in its infancy and did not work that well either. In those days, you’d have a large box around your neck.

It wasn’t until I was in my late 20’s that I got my first hearing aids. They were really helpful for one-to-one situations but not in group settings or in noisy environments.

Being self-employed and working on the farm meant my hearing loss did not hold me back professionally. Working together with my wife Lynne, we built a successful farming business.

Over the years, my hearing loss deteriorated to the point I was receiving little to no benefit from my hearing aids. I struggled more with communication and avoided social situations.

Being a farmer meant I could just get on with my job, but I relied on Lynne to be my interpreter during business discussions and to also ensure we were not scammed. On occasion, some people have tried to take advantage of a business deal when they’ve realised I couldn’t hear and have acted dishonestly.

We knew at some point we would also want to ease back on some of the more physical aspects of farming and enjoy some more past-times together.

Being alone on the farm, I could manage life with my hearing loss. But a change in lifestyle and building new relationships would pose a major challenge for me.

I was so limited in what I could do. Lynne was the one who answered the phone and to be sure I knew what the message was, she’d write it on a bit of paper. That’s how hearing impaired I was. If we went out socially, I couldn’t hear, and I’d switch off. It got to the point where we stopped going out.’’

That’s been the catalyst for me to do something.

In 2018, after nearly 70 years of struggling with my hearing loss and no longer getting any benefit from my hearing aids, I decided to get my first cochlear implant.

Due to the lengthy wait times for a publically funded cochlear implant back in 2018, I self-funded my implant. The clarity of sound I was receiving from my cochlear implant was something I had never experienced before.

I knew shortly after getting my first CI I didn’t want to live my life with continued impaired hearing. I wanted my other ear to hear too; to have surround sound and directional hearing for the first time in my life was very important to me. Lynne and I made the decision to fund my second CI. My cochlear implants are the best investment decision I have ever made. They have given me so much more to life.

My CI’s have given me a second bite at life; I still marvel at the experience of talking on the phone, too long sometimes! They also take pressure off the people around me in not having to take special care that I understand what’s happening.

I am getting better at making conversation with strangers, something I really avoided in the past. The other day in the hospital, a guy was wheeling a load of plants on a hospital bed, it looked quite funny, and I asked him if he was taking them to the morgue! We had a short but hilarious conversation, where before, I would have just zipped up and said nothing.

In our hearing group, I notice that unilateral users still need some assistance with how you speak with them, even when they still use a hearing aid in their other ear. This is exactly what made me think I could do better with 2, and they have made a huge difference.

Richard is one of more than 120 adults in New Zealand who have bilateral implants, an implant for each ear. Because of the cost of up to $50,000 per implant, many people have just one which can be paid for by the health system, though there may be a wait time.