My life as a cochlear implant surgeon 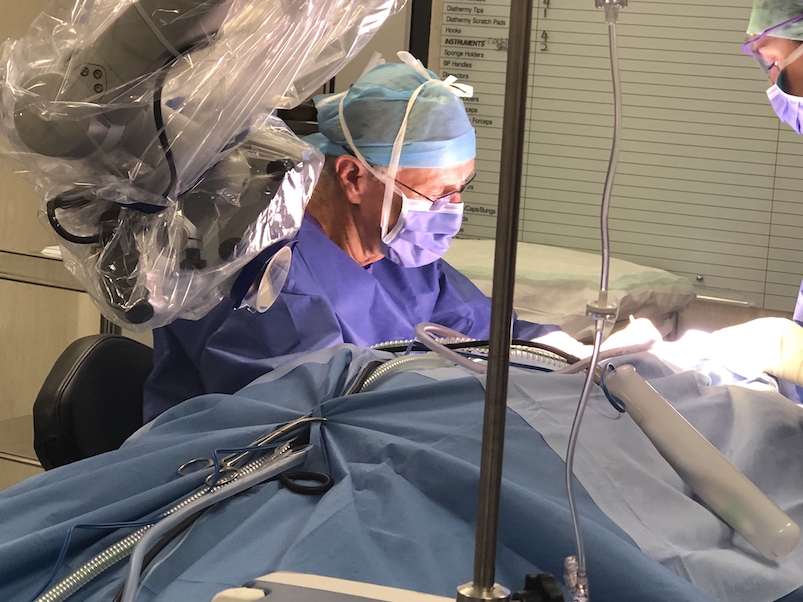 Well, I was born in Wellington on the 13th March 1944 to Bill and Jeanette Baber but 6 months later, Dad was transferred to Auckland as a psychiatrist, during the war. Mum was a professional musician, teaching piano and singing. I had 2 sisters, one older by 3 years and the other younger by 18 months.

When I reached senior school, I started at Mt Albert Grammar but was not doing as well academically as I could, so Dad sent me to his old school, Wanganui Collegiate, as a boarder. I enjoyed boarding school and finished up as a School Prefect because I was the Leader of the choir and also got my First 15 colours, playing as a wing. Dad had also enrolled me in the Mt Albert Highland Boys Pipe band as an in-augural member at the tender age of 9. This worked out well as Wanganui Collegiate had a pipe band of some repute although down to only 3 pipers by the time I got there. In those days we had military parades at school so we used to play the school battalion on to parade. Attrition of pipers meant that a brass band was established and I became the leader there, playing the trumpet.

I was always going to be a doctor (I'm a fourth-generation medic and there is a photo of me at 5 with a stethoscope) and strangely, my great grand uncle was an ENT surgeon in the UK and actually started the Brighton ENT hospital where there is still a Baber Ward! Thus I went to medical school in Dunedin, graduating in 1968. I decided to become an ENT surgeon as the ENT specialists I worked for as a house surgeon were easily the nicest of the surgical disciplines and indeed they gave me a wonderful introduction to the only UK ENT Professor, at the Royal National Throat, Nose and Ear hospital in London.

I returned to NZ after a wonderful time in the UK and Europe, in 1974 as a tutor specialist doing all types of ENT surgery, including Head and Neck cancer. I quickly realised that ears were my thing, completed a type of travelling fellowship in the USA to learn about the base of skull surgery and the new way of taking out tumours of the balance and hearing nerves. By 1986 the Deafness Research Foundation, set up by Sir Patrick Eisdell- Moore funded the first 2 cochlear implants in NZ. In association with Ron Goodey, we operated at the Mercy Hospital as the government wasn't interested in funding CI.

The CI program slowly grew although one year we had funds for only 5 implants for the whole of NZ and with many more potential candidates, the CI team had the dreadful job of choosing who would get one, a task we all hated because we knew we could do so much better. Over time, the program split into the North and South programs, a greatly improved relationship was developed with the government in terms of funding, culminating in the program we have today.

I think I have been terribly lucky to have been part of exponential growth in ENT surgery generally but the joy of working with people whose lives are devastated by hearing loss and then turned around by a procedure that is not too invasive has been the most wonderful part of my professional life. The other part has been the privilege of working with the numerous members of an extensive team all of whom, without exception, have a common goal of improving the quality of life for many New Zealanders. By that term team, I also include the lay members of the NCIT, Deafness, now Hearing Research Foundations, Pindrop Foundation and additionally, the Department of Health officials in Wellington who actually understand the importance of our work and support CI to the best of their resources.

As far as the future is concerned, I have the idea of writing a small book on vertigo/dizziness for patients (and in fact, many doctors) to better understand a very scary and common problem. I would like to continue as Pipe Major of a small pipe band, as the mental and physical requirements of piping are wonderful for general health and I would like to get an electric bike as they look so cool! If I was to give advice I think everyone should learn a musical instrument as learning and playing gives a wonderful way of diversion from the angst of life and to enjoy your work as that means that it is not working at all.

Rather more than I expected!